Have to start somewhere

And I've inserted a few photos to make the story a little more interesting..

It was quite a day. There were Kona Winds. That generally means from the south. Quite different from the Trade Winds, those are more from the north east. In Kaneohe the Kona Winds tumble over the Koolau Mountain Range and unusually strong gusts are often proceeded (or followed) by sudden lulls.

Even getting off the dock was tricky. We talked about how the wind coming directly down the channel was going to push the bow to one side or the other once the boat backed out of the slip and came to a stop. Non-sailors, or people accustomed to twin engine power boats don’t appreciate the fact that when a sailboat is stopped the rudder has no effect. So the boat just does what the wind wants, as if you weren’t there. The wind at the dock had been 12-15 knots but when we pushed off there seemed to be a lull. Wishful thinking! No sooner were we out of the slip and into the channel and stopped than a big gust tried to spin the boat around. There was a little dance where I gunned the engine forward and back trying to get some use out of the rudder when the boat was moving and trying not to run into something. Cirrus prevailed. If the wind had been a little stronger we might have ended up backing out the channel into the bay. Not the most graceful thing to do.The bit of excitement we had getting off the dock might have served as a warning, to a more observant group, of things to come.

Once we were out in the bay and getting ready to raise the sails conditions didn’t seem that bad. So, even though at least one reef in the main was clearly indicated I decided to just go ahead with a full hoist.

Before we go on I need to enter a caveat. A reef was clearly indicated. If one particular member of my regular crew had been there I would have got a “stink eye” look and would have put in the reef. But the weather was good, the water a little choppy but no swells and we were not planning to go way out into the ocean. And finally, I had a really tight crew and I figured we could all use a little exercise, Cirrus included. I hate sea stories where someone (over a couple beers) tells about all the dumb stuff they did and all the trouble it got them into. Here, we were frequently pushing our comfort zones, but just a little. To an unseasoned observer it might look like macho recklessness. But, there is another way to look at it. When things get rough and unpleasant at sea I don’t want to be figuring things out for the first time. When things start to get out of hand I love the feeling of ”Been there. Done that. What’s next.” that results from prior training experiences.

I was thinking about sailing with the main alone, but a couple minutes later we unfurled the jib as well and went blasting out the Sampan Channel into the ocean. I thought I felt the keel drag a bit on the sand bar near the beginning of the channel, and since the tide was going out that meant that we would have to come back in the Shipping Channel. The wind was probably at least 16-18 and a bit gusty. The waves were small and the sea was running in the wrong direction: out to sea instead of coming in. It was a nice long reach up the coast. We had a couple minor (45 deg) 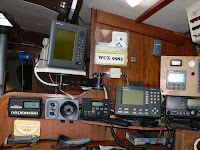 knockdowns in the gusts but it was all pretty manageable. In no time we were approaching Chinaman’s Hat and heading back in through the Shipping Channel. Here is where it got to be a little more fun than absolutely necessary. At first it looked like we might make it close-hauled into 20+ knots (and gusts). But it got harder and harder and the prospect of short tacking the channel was not appealing. Just about that time a couple short hard gusts managed to spin the boat and heel us over. It might have been 50 degrees, but it always feels like more when it happens quickly. So, I started the engine to help us negotiate the channel. That worked well and except for 3-4 more minor knockdowns we were preceding nicely when Chris pointed out that the engine was running roughly. (As an aside, let me emphasize how important it is to share stuff like that with the skipper. Other boats approaching, funny sounds, strange smells, alarm signals, frayed lines, etc. Anything at all. This skipper welcomes alertness. The response is always the same: “Thank you.”) When I went below to listen to the engine I noticed that there was air in the fuel filter. Later we learned that some of our “heeling excursions” had caused the fuel to slosh around in the tanks so much that a couple gulps of air had gotten into the fuel line causing the engine to run a little rough. 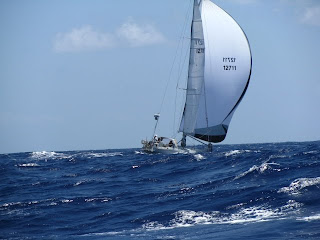 But since we didn’t know right away what the problem was, we shut the engine down and made our way down the bay under sail into a steady stream of lulls, gusts and wind shifts.

When the boat went over we sheeted out and let the traveler down. Then, as she came back up, we had to sheet in again and travel up. Somewhere in here one of the crew remarked that they had never had so much exercise trimming without changing course.

Finally, back in the bay we dropped the little stern anchor between Makani Kai and KYC and had a look at the engine problem. All that was required was to bleed the air out of the filter. But, in the process of checking things out I noticed that the fuel is low in the tank we are using. So we’ll probably make a trip to the fuel dock sometime soon.

The motor back to the dock was uneventful. The harbor was sort of hot, quiet and muggy. Hard to believe how much excitement there was waiting to be enjoyed just a few miles away . 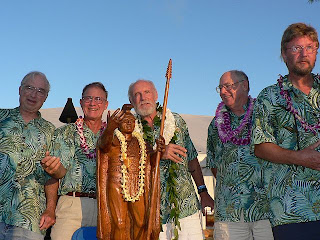