Save the King - Challenge

This is a sticky repost from the blog post:
Friends of Cirrus - Save the King !

[And more astonishing pictures right here:
Do I sense a little attachment to the King?]

The nicest award to Cirrus in the Pacific Cup 2008 was the statue of King Kamehameha, 3 foot high, carved in wood, given to the fastest (in corrected time) Hawaiian boat. Too bad this is a challenge trophy, which needs to be defended again this year.

So let's see who our Hawaiian competitors are this year ... Oh no!

There are only two Hawaiian boats sailing this year, one is Cirrus, and the other is - Pegasus! She will probably be the fastest sailboat on the Pacific, this summer. Sure, we are being rated on corrected time, but Philipp Kahn and his crew are highly seasoned sailors!

Is there still a chance for us? How did we fare in the past against Pegasus? My Cirrugator database has only two races with data on both boats, the Pacific Cup 2008, and the transpac 2007. Graph (13) from Cirrugator compares the runs in the two races on corrected time. As can be seen, in 2007 Pegasus beat Cirrus by a good margin, but in 2008 Cirrus actually beat Pegasus! And in more detail, the first starters in the transpac, like Cirrus, but to some degree even the late starters, like Pegasus, experienced poor to very poor wind conditions at the start (the curves go right, and Cirrus' curve goes way to the right) but later on, the curves are basically parallel. Actually, within both sets the curves are pretty much parallel apart from the beginning, and being parallel here indicates that on a corrected basis, the two boats eventually performed comparably. 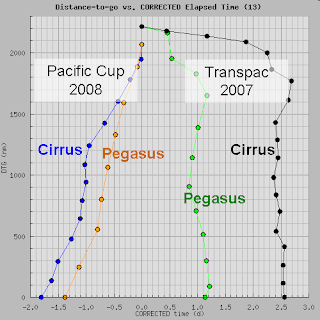 I can't help but present this little treat: In 2007 Cirrus had beaten Pegasus on ABSOLUTE time! Yes, no denying, we the slow boat were faster than the turbo! Ok, let's not study the details too much, but it sure felt good at least on this single day ;-).

Conclusion: we are the underdog, but after all, we do have a chance!

But we will need all the help we can get, and a generous serving of good luck! We therefore call upon all Friends of Cirrus for their support during the race. Save the King, as the King undoubtedly belongs into the hands of Cirrus!

Therefore, line the cyberspace waves along our route, and let's hear your cheers to make us sail better than ever! See the flyers below? Download them and forward by eamil, or print them out, and hand them to your friends and neighbors, your newspaper editor, and radio station, and TV station,  and, and, and, ... well, you get the picture. Whatever may come out, I am sure it will be exciting,