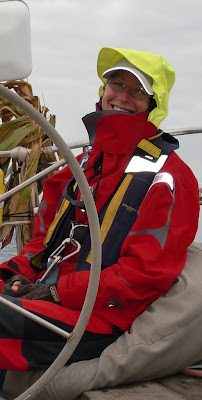 I go back on Cirrus now and can't believe I just spent a month of days confined to its 40 foot space--because it was not confining.  It's this unmoving ground that seems too solid.  I like a deck beneath my feet, a floaty bed with the water rushing by nearby, the ultimate planetarium just a step away, my needs limited to what's already on the boat.  To want what you have--seems easier on a boat.

I am no survivalist purist.  Yes, I struggled at times to keep down enough water to keep my pee from coming out brown (and succeeded!  Key to this--sleep with your water bottle and drink every time you go to bed or wake up.)  The trip from Hawaii to California included days of seasickness, intense heat, no wind, glassy seas, lots of motoring, and then lots of hand steering in high seas.  It also included watching episodes of "West Wing" on my iPad and finishing "Pale Fire" by Nabokov.  It included nights of stargazing, of identifying constellations with skipper Bill--Scorpio, Cygnus, the Summer Triangle.

The race from California was more comfortable and more focused on sailing fast--but there were still nights I could fit in cultural juxtapositions--we had a couple days of light winds, and Bill shortened the watch schedule from four hours to two and let us stand watch alone.  One starless night, standing watch alone, zipping along into the blackness, watching the phosphorescence in the wake, I listened to show tunes.  "If I Were a Rich Man" and "Cabaret"--such moments are so Evelyn Waugh-esque--because I held two thoughts in my head--my remoteness from civilization, my responsibility to my crew and the possibility of things going quickly and catastrophically wrong, contrasted with the utter frivolity of show tunes memorializing diaspora and forshadowing holocaust.  "What good is sitting alone in your bunk . . . "  I believe I sang out loud, but softly, as to not wake anyone.

Clearly, I was not the strongest crew member, or the funniest, or the most helpful.  My attitude at times lagged.  At times, I watched episodes of "Firefly" in my bunk, and requested breakfast in bed.  I didn't wash very many dishes, but I washed some.  I was not quick to hand steer when I knew that "Auto" could do better, and, yes, I did get overconfident after several turns at the helm under spinnaker and accidentally jibed (but then recovered!  No breakages or injuries!)

I take some credit on the delivery that when the winds and waves were high and lives were at stake (when are they not at stake?) I came through and dragged myself on deck for multiple watches, but those laurels only last as long as the next race.

Yesterday, my older sister asked me what I learned from these trips.  Other than becoming more intensely aware of where I fall short, I also became aware of where I want to do better.  I fall a little in love with each of my crewmates on these lengthy trips, become impressed by their positive qualities, and want to become a better person.  I listen to their stories, learn the names of the people important to them.  For a time, the heaviness of one's own story lifts and we share in the ur story--a group of people slowly traveling from here to there.

I will always treasure the memory of Chris singing "Bird on a Wire;"  the night Bill and I talked about the novels of Neal Stephenson; Kate laughing in her bunk at my jokes;  Ulli slowly revealing his shapely legs, cutting his long pants with dull scissors slightly shorter each day as the weather got warmer;  Caroline's catching, cleaning, and cooking up several meals of Mahi Mahi;  Mark's spot on speculations regarding Pegasus' plans to sabotage Cirrus by sending remote controlled attack flying fish;  Ric's reciting lines from Pablo Neruda in Spanish.