Sailing on the Wild Ride 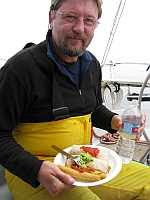 At 8 am PDT this morning, our 24h-run was an awesome 187 nm (nautical miles); this ties the record for a daily run for Cirrus from 2008, but this time we were under white sails only! This didn't come from nothing. It was a wild ride, let me tell you:

The day begin with a gorgeous sunset. After the night had been so crystal clear over the complete sky, the morning continued. First the moon rose, only a thin sliver, because we are going into New moon. Then, about an hour later, the sun followed. And not only did we get a full 360 degree view, also nothing near, at the horizon or beyond, not a single cloud, obstructed the view of the sun, coming out first as an red glowing pin head, quickly widening to a bar, and then becoming a fiery orange fireball. I don't recall having seen a sunrise like that ever in my life.

The day continued with good and increasing wind. The waves also increased, up to a typical wave height of about 2 meter. Whitecaps on the waves were then everywhere. And as sudden as the sky had changed from a full cloud coverage to completely open on the previous day, it changed back to a complete and thick cover within less than 3 minutes! Wind hovered around 20 kn. We didn't put a reef in, following the orders of Chief Commander Kim. (Well, we were thinking that this is what the order said, but apparently the race committee censor had stepped in and blackened out some words (wink, wink) as they might have seen it as 'outside help'. We should not discuss this and keep it a secret on the blog, where nobody can see it! Just kidding.)

Anyway, we continued to run in full gown. Wind went even beyond 20 kn. So all you wind dancers out there: No more Pffft, Pffft, and whatever you were doing. We have enough wind for now. With a full cloud cover and a New moon, the night was pitch black. You couldn't make out the difference between water and sky; the horizon was nothing but a diffuse dark grey area. To top this, the tricolor navigation light on the top of the mast went dead, and we continued with the position light on the bow. This 'illuminated' the waves near the bow, but only their white caps. Obviously, even if we had been able to somehow respond to any incoming waves, it would have been to late to react. The lights had one advantage: they marked the bow. It was so dark that we couldn't even see the bow from our position at the helm, and observing the movement of the bow is one thing which helps in steering. The one really trusty thing is still the compass, glowing red in the light of an LED. The conditions were such that we no longer used Otto (our nickname for the Autohelm, the mechanical self steering device) but steered manually.

What a workout! The waves were mostly from the starboard aft quarter, but of course, you couldn't see anything anyway in the darkness. You had to act on the wave action and anticipation. Every ten minutes a big wave would hit the bow, and throwing a few buckets full of water over the full length of the boat onto the helmsmen. It was wet in the cockpit and began to become wet down below. The instruments over the companionway also became clouded by condensed water, and were no longer of any help, as you simply couldn't see them the position at the helm. The water is rushing along the boat with a roaring sound, turning into thunder when the wrong wave hits the boat, and slams us broadside into he leeward water, and the wind howling in the shrouds further underlines the might of water and waves.

Is it better down below? Not by much. When you are in bed, you are being slammed around with the boat movement. Best way to handle it, I found, is to press your back to the leeward side of the bunk (the side to which the boat will lean over) and raise your knees to lock you into that position. At least you won't fly around in bed. But in your semi-sleep you are getting in, the sound of the water gushing by at a distance of 1 1/2 inch combined with the howling wind and rattling of blocks, lines and more, sound more terrifying than it actually is. I think I slept better at other occasions.

Last thing: how to get around on the boat? Carefully! And with one hand always, always, always holding on to something very, very firmly. Growing 'sea legs' won't help; there is just no way to maintain balance, when the suddenly jumps up, or down, or left, or right. Putting on pants is an artistic endeavor - step your feet against something solid, and then lean over for like 45 degrees, and for a few fractions of a seconds you might get away with using both hands. Might. Imagine what it means to use the head (uhm, no, this has nothing to do with using your brain, which is largely optional in this case, and more related to the other end of the human body. The head in mariners language is the toilet).

Isn't that all wonderful? Cirrus likes it, and so do we. Aloha