Devil Is In the Detaiils 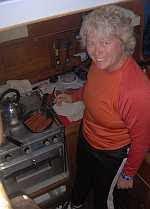 Earlier in the trip we noticed that Mark's PFD had a red flag showing. The auto pill cage had been used and the CO2 cylinder expended. In a word, it was useless (except as a safety harness. He had vague recollections of having loaned it in the past so there is no way to know how long ago someone set it off and then returned it to him without comment. We have adequate spares for this sort of thing, so we were able to rearm it for him.

I was telling the crew that a double tether (3 ft and 6 ft)was required to leave the cockpit. Caroline's tether caught my eye. Sure enough, it is the same one she used in the 2007 Transpac. On that occasion I remember looking on with amazement one afternoon when she took out her knife and cut off the 3 ft tether and threw it away. "It tends to get caught on things." she said.

Kathie and Caroline have done a fantastic job on the provisions. Caroline is doing all the cooking since Kathy fights sea sickness and the guys can't be trusted not to make a mess of things.

Rick and Mark took part of the boat apart (in pitching seas) to check the water level in the forward battery bank. One cell was completely dry. That has been fixed and even if it does not solve the battery problem it needed to be done none the less.