A Finish for the Real Men Among Us 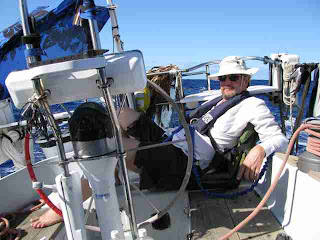 Sunrise saw a boat slowly crossing minor waves and low wind. It shouldn't stay this way. Conditions were just right to get the spinnaker up. Shortly after, the wind picked up, the waves increased, and we were flying through the water. It continued. We were at the limit. Waves crashed over the bow, jumping the dodger, filling the cockpit; fish flying through the air, tuna and mahi-mahi bouncing their heads at the hull. Rogue waves all over the place, playing ping-pong with that little float called Cirrus. Skipper was a bit concerned, but on we went. The kite almost exploding, we needed three men for the spinnaker trim alone. We sure made a good time, taken off an hour at least from the finish time. The photo shows us hard at work at the helm.

NO! NOT THIS PHOTO! THE OTHER, THE ONE WITH THE PHOTOSHOP EXTENSION! DON'T SEND THIS ONE ! ..... Too late.

Well, now that you know I do admit that I may have not have been completely thruthfull in describing all the nuances of our final day at sea. But what can you say about a day in mellow weather, with beamy wind blowing into white sails? I let Rick give the answer. The Sarong-Bimini is Caroline's work - whose else? I am so ashamed.

But it is true that we are making good progress; the low waves allow decent speed even at low wind. And Otto is driving, which at beam reach he is doing really well. Currently we are 1 hour 15 min ahead of expectations, and may even get better. So arrival time closer to 2 a.m. Hawaiian time (not 3 am as reported earlier). Be aware that things may still change up or down! Watch for our 25 miles forecast in about 4 hours.
Ulli

P.S. The 100 mile check-in was a real problem. There was so much noise that I could understand basically nothing. And vice-versa. Despite that I could make out that it was Valerie, who was talking. Don't know on what grounds, but I was sure about that. Some 30 min later, after recharging the batteries - though this has not been the problem - it worked still poorly, but at least we finally got all the info across. Hopefully 25 miles is easier.