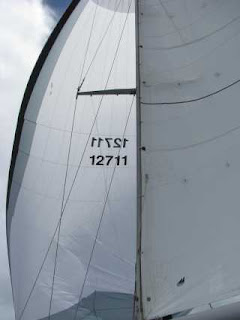 Around noon today, under blue skies and fluffy white clouds, with the wind behind us and the boldness of destiny before us it happened. Yes, make no mistake, The chute was launched. You heard right: "THE SPINNAKER IS IN THE AIR!!!!!!!"

A cry went up from the assembled throng, "LET OUR DEEDS BE WORTH A SONG."

As a line formed for the privilege of driving the boat in these trying conditions grown men were seen elbowing the weaker of their colleagues out of the way. Women were observed abandoning their children by the wayside.

Finally, as some semblance of order was being imposed on the process another cry went up "A Squall Approaches. Clear a path for the Skipper." And so it went, from one adventure to another until all were sated. Reluctantly, around 1630 the fun came to an end and we put the chute away for the night. More tales tomorrow.

Visitors to this site often ask what they can bring for the crew, what have they been missing: ice cream, pickles, whatever.

A casual pole reveals that the most desired reception of all would be a luncheon (perhaps on the next day) consisting of perfectly ripe fruit, soft french cheeses, pate, crudites, sliced baggette, and a dipping sauce of extra virgin olive oil and aged balsamic vinegar. A suitable, crisply cooled, white wine (or two) would be nice. Don't go to any trouble. We were thinking mostly WHOLE FOODS. For dessert, a variety of gelato--lemon grass flavor is a particular favorite of the skipper.